By: Sarah Gordon
from Ma'ayanot Yeshiva High School for Girls

A PBL approach to Talmud study can help students connect values from the text to their own lives in an authentic way, irrespective of how practical (or impractical) the cases in the Gemara. In this unit, students used their knowledge of Masekhet Makkot and Arei Miklat to research solutions for problems with the American prison system.

“How is what we’re learning relevant to MY life? Why should I care about anything that we are learning – none of these laws are relevant or practical!”

These were some of the questions I heard often from my students when teaching high school Talmud.

Answering this question was difficult at first, as I was teaching the first chapter of Masechet Makkot which mainly deals with the laws of edim zommemim, a complicated system discussing when and how different groups of witnesses can perjure each other. I found that my students struggled with the text material and could not see how what they were learning could be meaningful to their lives outside of the classroom.

I wanted to switch the way that I taught Talmud, but certain hesitations were holding me back.

I decided to experiment with overhauling and reframing my approach to teaching Talmud, incorporating ideas from two areas.

This PBL unit on Arei Miklat and Prison Reform came after spending a few weeks learning sections of Masekhet Makkot about Arei Miklat in the traditional, rigorous way, focusing on Gemara skills, vocabulary and content. I framed these units with students by sharing that they would soon be applying their Gemara knowledge to solve issues with the American prison system. Periodically throughout our learning, I would ask the students to connect what we were discussing back to what they knew at that point about prisons (for example: What are the goals of Arei Miklat and how might those differ from the goals of prisons? Are the goals rehabilitation, protection or punitive?). Students were also tested on this material in order to ensure skills and content benchmarks were being met. This ensured that the PBL learning would not come at the expense of Gemara skills.

I tried to incorporate many elements of Project Based Learning into this assignment, as defined by the Buck Institute for Education, including starting off with a driving question, allowing for student voice and choice about their topic, providing time for sustained inquiry and asking questions, choosing a topic that would allow for authenticity and real-world learning, allowing time for critique and revision, having students publicly present their projects in front of experts and allowing time for reflection.

1. Driving Question: Students were presented with the driving question of “How might our knowledge of Arei Miklat help us solve problems with the American prison system”?  This led to an animated class discussion where students came up with their own questions on this topic, connecting what they were learning in Makkot to real-world issues and including “should the United States have different categories of accidents and prisons similar to what is found in Makkot?” and “How might the concept of hiyuta (a certain quality of life must be maintained in the Ir Miklat according to Makkot 10a) work with the concept of solitary confinement?” 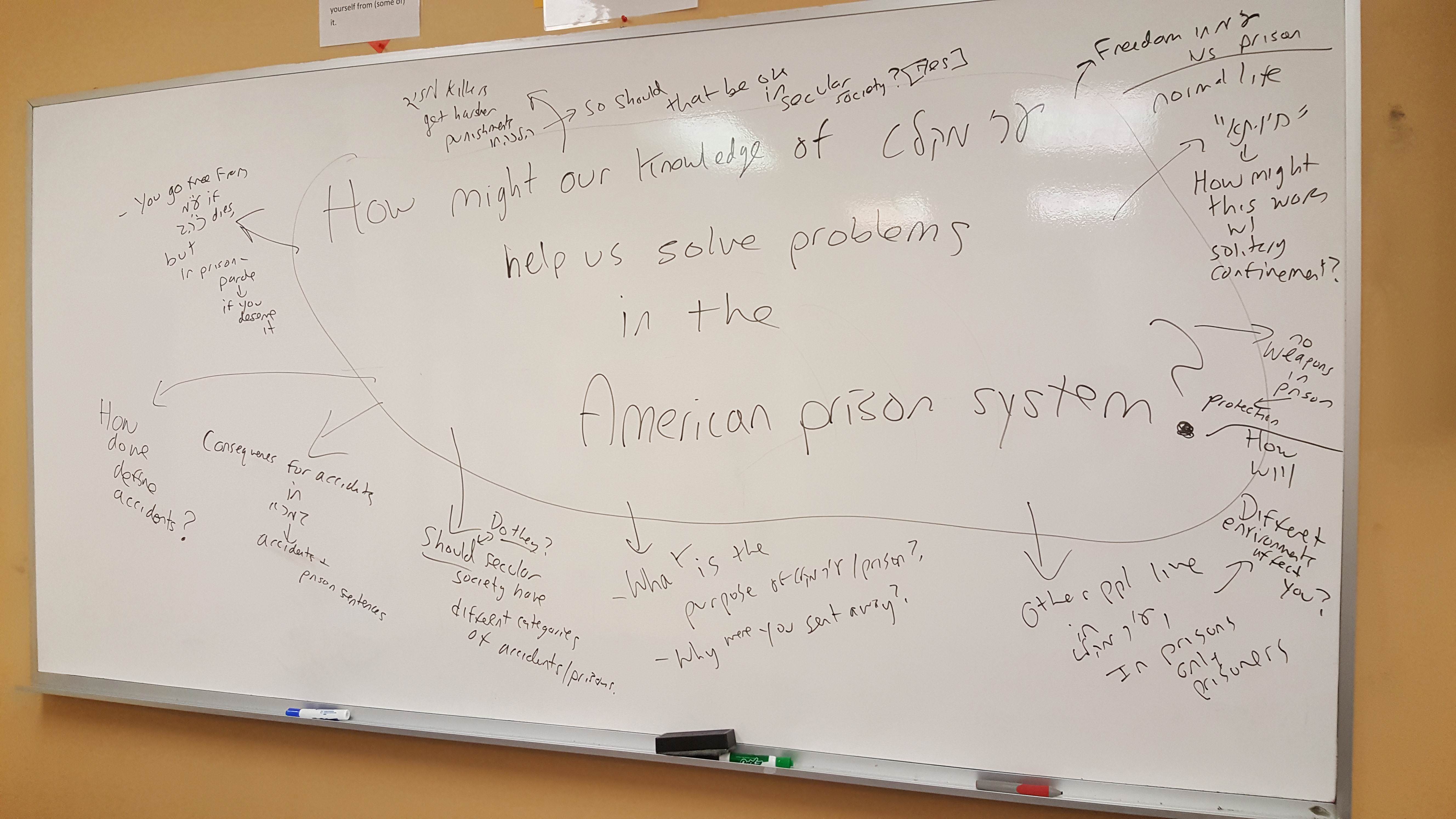 I was happy to see how engaged and excited the students were when asking their questions. This was a topic that interested them and about which they wanted to find out more. I could also see how students were drawing connections between what they had learned in Gemara about Arei Miklat and what they wanted to know about the American prison system.

2. Sustained Inquiry/Authenticity: Students watched excerpts about issues from the documentary “13th” on Netflix and heard a guest lecture from Rabbi Ari Hart about his experiences volunteering in prisons. The ensuing class discussions led to many more questions by students and increased the level of buy-in to the project.

3. Student Voice and Choice/Critique & Revision: Students were given a timeline of how the project would work. Each group researched their questions until they decided on a topic – allowing for in-depth inquiry. I handed out resources including articles, websites and podcasts to help them with research and different options to choose from (one group decided to research a topic they thought of on their own about the treatment of women in prisons). I also had periodic check-ins with each group to provide guidance on their projects and give feedback.

4. Public Presentations: I invited a range of teachers to watch the presentations and ask questions to students at the end. I specifically chose teachers with a Judaic Studies background who also taught American History or Government or who were lawyers so that they would qualify as quasi-experts on this topic. After each presentation, the other students in the class and the guest teachers asked questions of the students presenting. Many students felt this was the most enjoyable part of the project, when they were able to act as experts in the front of the room and answer questions on the topic they had chosen. 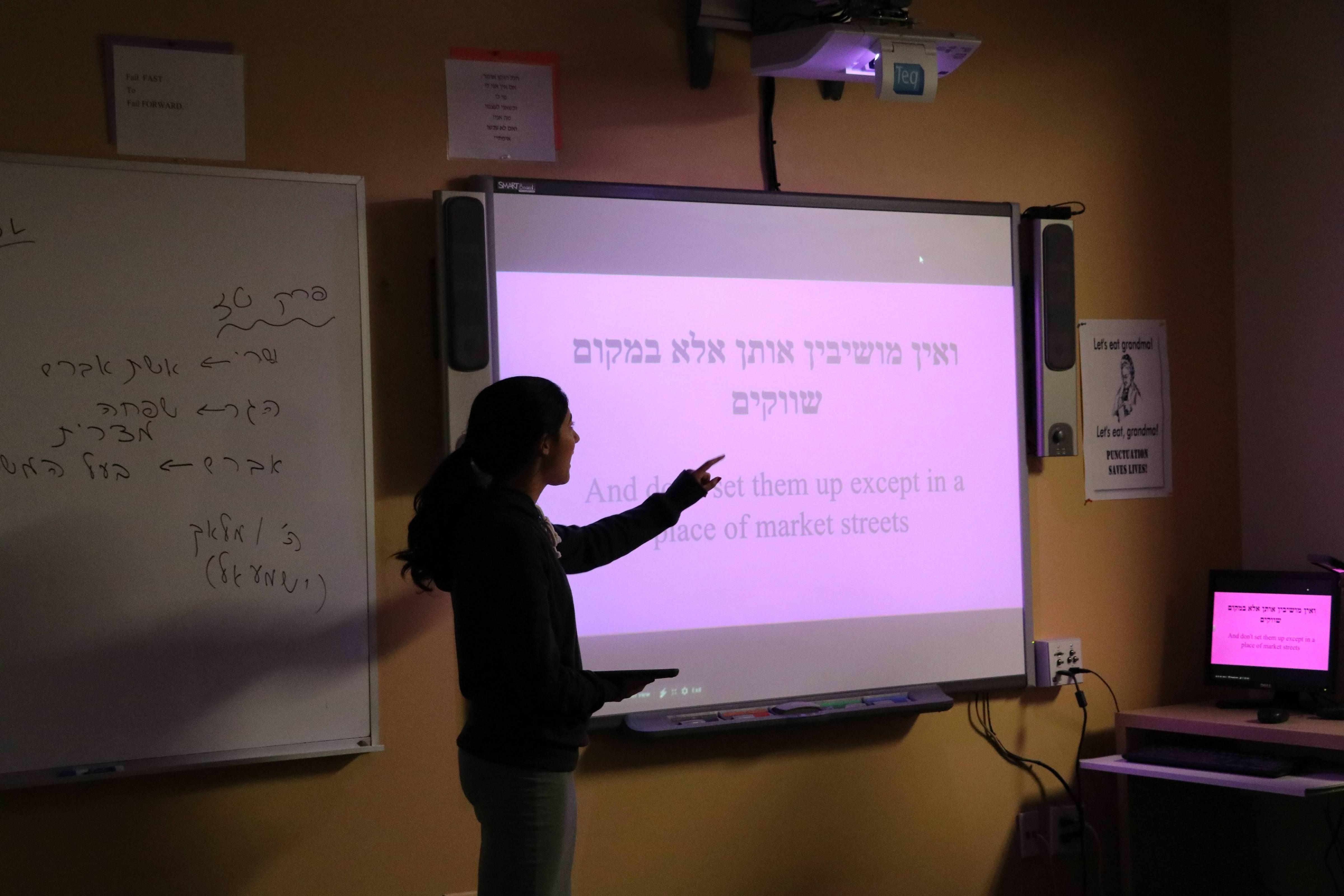 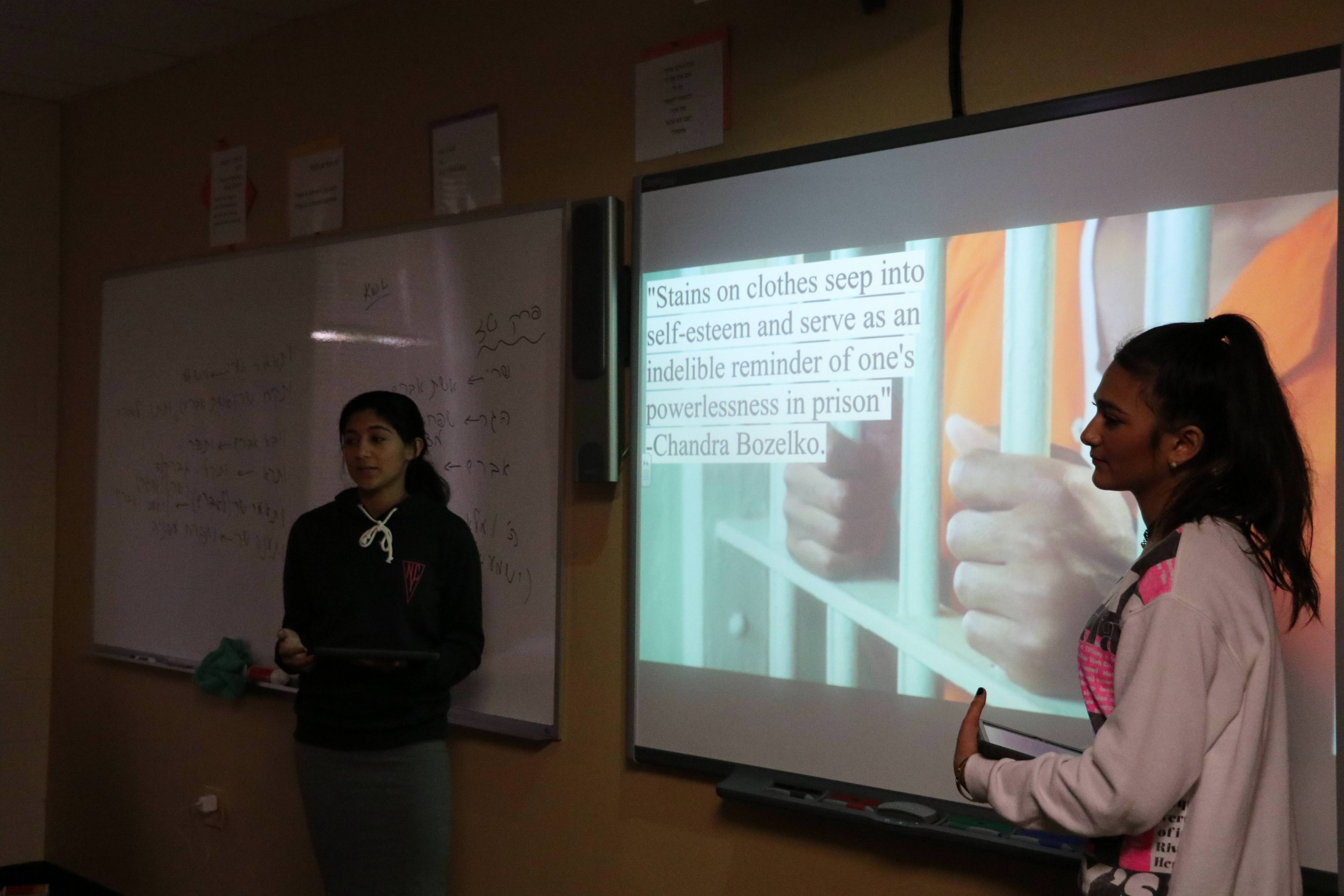 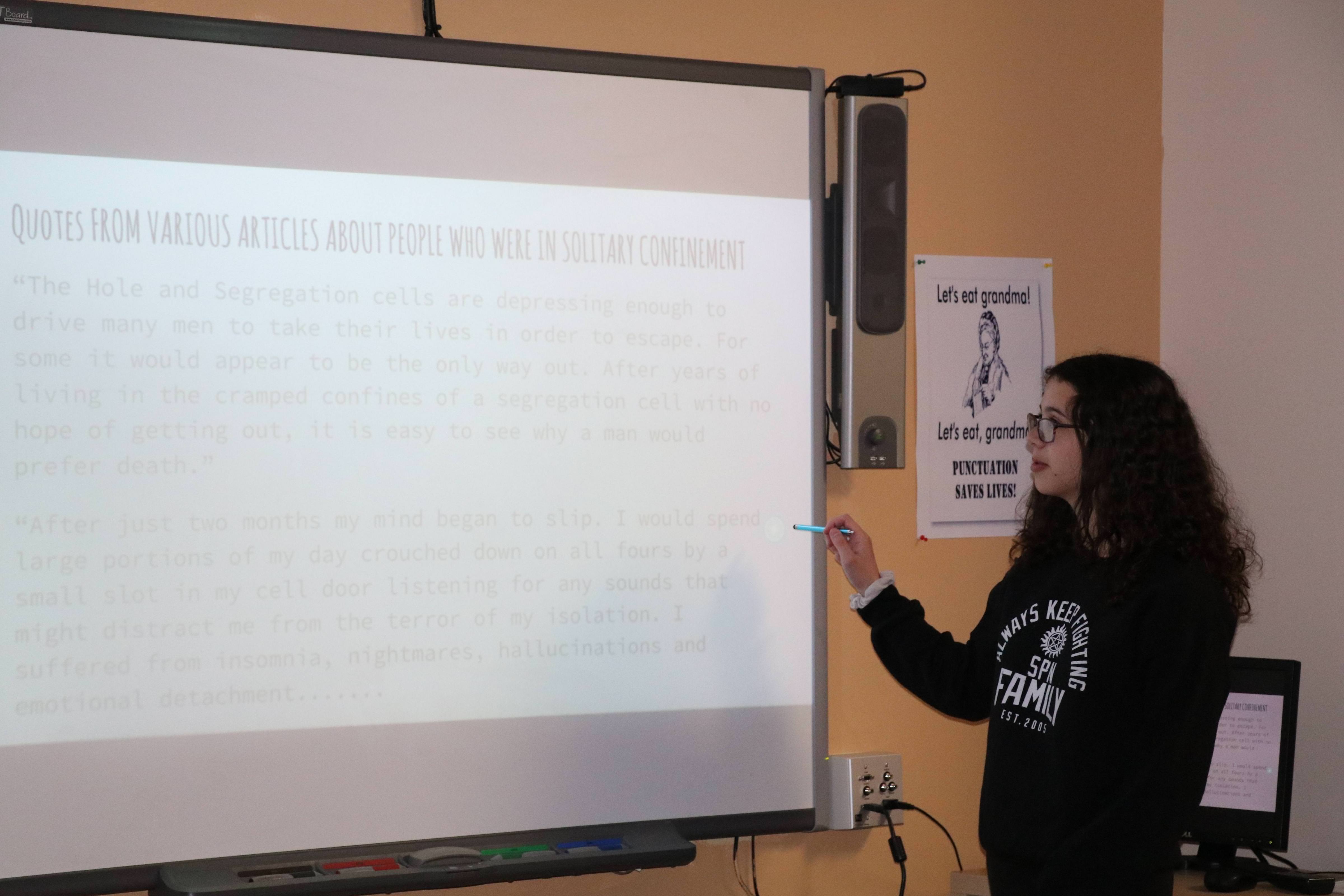 I had the students fill out a google form reflecting on their experience. I asked questions such as “What was the most important thing you learned in this project?”, “What do you wish you had spent more time on or done differently,” “What was the most enjoyable part of this project,” “How could the teacher change this project to make it better next time?”

I was happy to hear feedback from students about how they now found the Gemara relevant. Many felt very invested in their topics and wanted to find out more about issues in the prison system.

When asked what was the most important thing learned in the project, students shared:

When asked what was the most enjoyable part of the project, students shared:

Overall, I was very happy with switching my method of teaching Talmud. The Prison Reform project animated the classroom and had even the most skeptical of students sharing how meaningful and relevant they now found Gemara class. Incorporating select PBL units did not take away from the intensity of the class or the skills being imparted and added engagement and excitement of the students more than made up for the missed class time.

I would do a few things differently next time. Firstly, I would not have different groups research the same topic and if a topic is already chosen by one group, I would have the other group research something else. Some of the later presentations did not get as much of an enthusiastic debate during their Q & A because students had already exhausted this topic with other presenters.

I also found that some groups were much better presenters than others. I would devote more class time to discussing and modeling what goes into a successful presentation, specifically how to use powerpoint in an effective way. Some groups put too much information and text onto the powerpoints and then read straight from the slides instead of speaking to the class.

Due to time constraints, I was not able to complete the last part of the project, where students would meet with their local member of government to lobby for specific change in prison reform based on what they had researched for this project. I had wanted to reach out to the office of NJ Senator Corey Booker, who has advocated for legislation on this issue and arrange a meeting for my students with one of his aids, but simply ran out of time. I would definitely institute this as part of the project for next year as it provides an important opportunity to educate about lobbying and civic engagement. As well, according to David A. Kolb’s experiential learning cycle, it is important to provide students with opportunities for active experimentation after a learning experience where they can take action in new environments. Providing opportunities to create change and lobby for prison reform would be an important part of an authentic, real world learning experience.

I have experimented with other similar PBL units in my teaching of Masekhet Makkot and Masekhet Kiddushin in order to provide spaces in the curriculum for students to discuss the values that arise from the texts and how they can apply these values in their personal lives. This is a work in progress and each year I hope to add more units in this style that focus on meaning and values that can be drawn out of the texts of Gemara being taught. I hope this reframing of my approach to teaching Talmud will help students see the relevance of the texts they are studying, irrespective of their practicality.

Other units have included:

Sarah Gordon is the Director of Student Activities and Experiential Education at Ma'ayanot Yeshiva High School where she also teaches Talmud and Israel Engagement and Advocacy.